Beyond the genome: Why proteomics is the final frontier

Unlike anything that exists in Australia, the Churchill Club Top Tech Debate showcases the visions of six industry professionals through a 3 minute 'pitch' about a trend they think a) is not obvious today, and b) that will create explosive impact in 3-5 year's time. The event is a replica of the Top Tech Trends event that has been successfully run by the Churchill Club in Silicon Valley for 20 consecutive years.

I was recently given the opportunity to participate, and I of course accepted. One of the things I love most is to be able to engage a broader audience to inform them about the power of proteomics. Up against some incredible competition (the full video footage can be found here), I was pleased to accept the winner's trophy on the night. While I was humbled, we all know the real winner is proteomics.

In this blog post, I have shared my pitch with the aim to open a broader discussion on the topic. Do you think Proteomics is the final frontier? Do you think it's set to transform our understanding of disease and propel us into a more personalised health-based future?
‍
I'd love to hear.

‍
Beyond the genome: Why proteomics is the final frontier that is set to transform our understanding of disease and propel us into a more personalised health-based future.

From ancient times, we have as a species been driven to understand what makes us tick through asking questions like “How do elements come together to form the building blocks that create life”.

Like many others before me, I’ve dedicated my scientific career to finding ways to stand on the shoulders of predecessors and use the cumulative biological knowledge, which is now exploding in size as every day passes.

I’m grateful to be here to try to convince you that proteomics is the final frontier that in the next 3 - 5 years will start to transform our understanding of disease and drive personalised healthcare.

To do that, I’ll walk you through 3 major reasons.

1. Because of the importance of the proteome and how it impacts ALL biological systems

Probably one of the most impactful events in history was in 2004, where we got our first glimpse into the apparent complexity of humans, when we sequenced the human genome, providing us with the instruction set of 20,000 genes.

This was considered the final frontier. We know now it’s not and instead has opened a gateway into the realm of where life really exists - in the stuff produced from genes, which are called proteins. This field of study is called Proteomics.

We know now that it's the products of genes, their corresponding protein form, that is where there is an explosion of complexity, and by measuring the protein forms allows us to understand life at a molecular scale.

There is a simple analogy here. The 23 million people in Australia roughly equate to the same number of individual proteins inside a single human cell. If these people were assigned to 20,000 professions - from builders, lawyers, surgeons to engineers-, genomics allows you to understand the types of professions that exist, whereas proteomics allows us to tell the difference between the quality of builders and potentially what about them is different.

2. There is an absolute need to move away from treating disease using traditional approaches and instead move towards personalised medicine.

If I can step back to the analogy about the 20,000 professions that exist within 23 million Australians. Let’s say a few of the computer programmers within that population decide to go rogue and become disruptive hackers.

Understanding why programmers went rogue is the study of how specific proteins change, which, in turn, allows us to find them and better understand what we can do to stop them going rogue. This is personalised medicine -- and it will allow us to diagnose and apply the appropriate treatment based on an individual’s molecular measurements.

3. The sheer amount of commercial capital being poured into understanding the proteome

In the past 18 months alone, we’ve seen over $1.4 billion dollars being poured into proteomics companies in the US - this is completely excluding any academic initiatives. And it’s a trajectory that’s set to continue.

In closing, I am privileged to be able to do what I do and be at the coalface of such a dynamic and powerful technical enabler that has the potential to enable millions of life scientists to be able to leverage proteomics -- the final frontier of medical research. 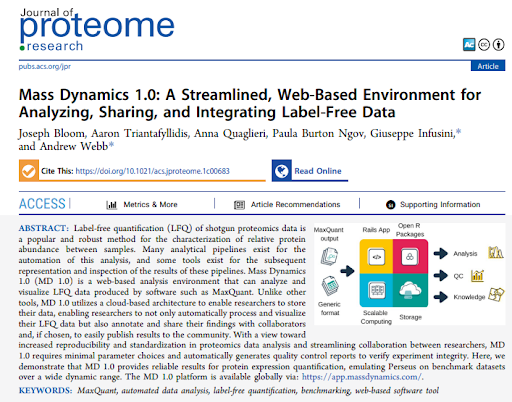 Join us our community Slack channel

This is the place to chat about Mass Spectrometry, Proteomics, -omics or anything else you think the #massgeek community would like to hear about.
Start a conversation now